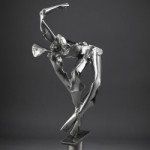 Yuande is a distinguished artist with a notable career since the 1980s. He is perhaps most known to collectors for his Chinese Opera series of paintings from the 1980s and 1990s. In the years since then, Yuande has ventured to concentrate more on 3D molded metal art works, which are unique in that they focus on the fluidity and movement of the human body, rather than concentrate on static beauty and aesthetics.

The renowned playwright and stage directorÂ Chin San Sooi had this to say about Zheng Yuande:

“Of his works thus far, Yuande has depicted intimations of the human soul. Now, in his sculptures, in 3-dimensional figures, in song and dance he calls for a celebration of that soul.

In the toughness of steel and bronze
Matted or polished sinewy lines
Breathe elegance and grace
A breathless beauty emanates
Imperceptible and still
Eons of eternal Presences.
Reclining or standing
Provocative or inviting
The sculptures tease
One
To take flight of One Thought
To excite One Imagination”

His works were featured in ‘The Album of Works by Overseas Chinese Artist and Foreign Artist of Chinese Originâ€™, published in China, in 1995.

Through the years, his work has attracted a distinguished list of discerning private and corporate collectors, chief among them: