Ocean Eyes is the Laksamana Ryo’s third solo exhibition and features a collection of new works created specifically for the solo. The exhibition launched on Saturday, August 12 at the Langgeng Art Foundation (LAF) space in Yogyakarta, and continues until September 30, 2020. Ryo is a young Yogyakarta-based artist whom Artemis Art has been exhibiting frequently in our international art fair participations, most recently at WHAAAAAT’S STUDIO OPENING in Taipei, Taiwan early this year.

Curated by LAF’s Citra Pratiwi, a total of 17 new works are included in Ocean Eyes, featuring Ryo’s characteristic ‘big eyes’ figures the artist is well-known for. The solo exhibition also sees the debut of Laksamana Ryo’s The Hope, a 30-edition toy collectible produced through Artemis Art’s collaboration with the artist. Details may be viewed in The Hope tab to the right.

In conjunction with Ocean Eyes Langgeng Art Foundation has produced a eCatalog for the exhibition, which may be downloaded (in PDF) via this link.

Ocean Eyes: Of that which are Split and Wrapped by Laksamana Ryo

Laksamana Ryo (b. 1993) is a young artist who grew up in the coastal city of Banyuwangi, East Java, Indonesia. Ryo grew up with Sunday morning cartoon serials, “Emo” music, and Indonesian translated manga comics. Since young, Ryo has been familiar with the hustle and bustle of the home-based garment industry. Industrial life, labor and transnational work circumstances permeated into his local environment and became the life that he experienced, becoming Ryo’s creative reservoir. Ryo’s daily existence is closely related to that life (industry, workers and transnational work), creating a unique landscape that he pours into his art.

In this solo exhibition, Ryo ameliorates his views on how pop culture grows. Titled “Ocean Eyes”, Ryo presents a series of figures, exhibiting a particular eye style known as “Big Eyes” in pop surrealism. This “Big Eyes” style was first introduced by Margaret Keane in the 1950s. Big eyes visual imagery in paintings usually depicts childish purity by magnifying the size of the eyes.

But Ryo’s paintings are somewhat different. His figures are inspired by portraitures of popular icons. The figures in Ryo’s portrait works tend to be satirical, despite them being presented in a cute atmosphere. The combination of surreal situations, based on dreamy desires and the subconscious, blends with the mundane and superficial, such as fashion, toys, games and superheroes.

Ryo’s big-eye figure not only represents something naïve. These figures blend together the identity struggle between being local and imagined desires to be global. In this solo exhibition, Ryo presents industrial objects such as cotton flowers, zinc, cardboard, and fashion brands. This stylization was chosen by Ryo as a memento of his past, at the same time, Ryo’s attempt to translate the meaning of pop culture itself.

In this exhibition, Ryo presents three experiments. First is the cutting canvas, where the canvas is cut and mounted onto hardboard in the shape of the figure. He installs these cutting canvases on rusty scrapped zinc sheets. Then, in his second experiment, he wraps his works in cardboard, which is then partially torn off, adding ‘Fragile’ stickers around the cardboard edges. The artwork can be seen peeping from behind the torn cardboard. In the 3rd experiment, Ryo presents portrait paintings of imaginary figures he’s chosen, adorned with splashes of acrylic paint.

Ryo seems to have built an imaginary realm of chaos; dirty and damaged becoming the aesthetic atmosphere. It is here that Ryo invites the audience to enter a space that isn’t singular, boisterous and mutually friendly; but in a sense this space is what Ryo experiences as his reality within our urban expanse. Ocean Eyes is a binocular of dreams, desires and imaginations that arise from hopes for a trendy, dapper and “now” life. Where are you in these paintings?

The Hope is Laksamana Ryo’s first premium collectible, produced in collaboration with Artemis Art. The toy is available for sale, limited to 30 editions, and priced at USD 215 each. It debuted at Ryo’s Ocean Eyes solo exhibition in Yogyakarta, and is the first toy produced by the artist. As of the time of this post’s publication, there are still editions available but are expected to move fast!

Click on an image thumbnail below to view full image with details. Contact us for any artwork enquiries. 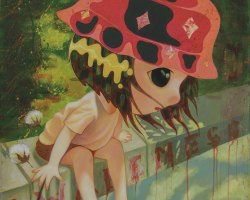 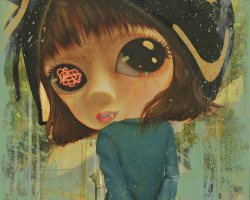 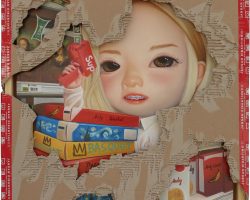 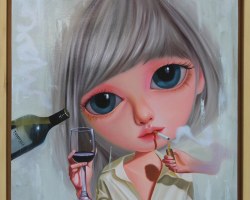 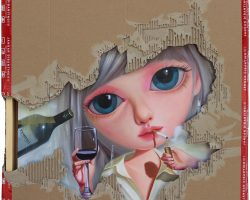 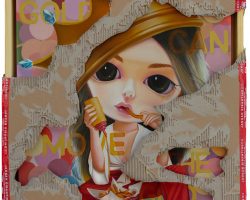 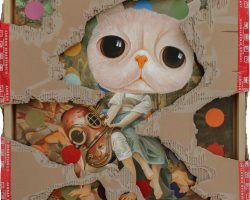 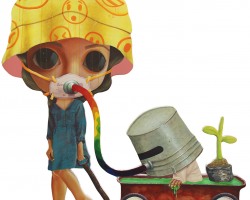