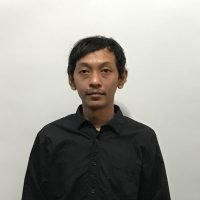 Gatot Indrajati was born in Bogor, West Java, but grew up in Magelang, one of the major cities in Central Java. Since young, Gatot has always had an affinity with wood, fashioning his own toys creating his own versions of superheroes by his own handiwork, not able to afford the commercially available metal or plastic figures and toys enjoyed by children his own age.

Later on in life, pursuing his higher education at the Indonesian Institute of the Arts (ISI), wood became the primary medium for his sculpting work. His artworks, regardless of whether they are sculptural toys, assemblages or paintings, demonstrate the affinity Gatot continues to have with wood.

Gatot Indrajati is thus far the only artist to have won the UOB Painting of the Year award twice; the first time in 2011, and once again in 2016. Not only did he win the award a second time, but Right or Wrong My Home, the artwork submitted, was selected for the Painting of the Year at the regional level as well.

His depictions of wooden toys on canvas are critiques of society, dolls and toys becoming metaphors for those who become the playthings of others, a phenomenon that exists in society today but not often acknowledged. His works provide a “second life” to these playthings, as well as provide a platform for Gatot to express his opinions about issues he observes in society, be they sociological or ecological in nature.

“An Interview With Gatot Indrajati, Winner of the 2016 UOB Southeast Asian Painting of the Year” – UOB YouTube Channel, February 22 2017