Posted at 20:16h in Events & News, Exhibitions by The Gallery 0 Comments
0 Likes
Share

Dystopians is Ajim Juxta’s sixth solo exhibition, but in addition marks an important milestone in his career – his first solo exhibition beyond Malaysia’s shores. The exhibition opens at 6pm on Tuesday, June 11 2019 at Vinyl On Vinyl in Makati, Metro Manila, Philippines.

Earlier this year, Ajim’s ink and coffee paper artworks were included in Vinyl on Vinyl‘s backroom collection during this year’s edition of Art Fair Philippines. Vinyl on Vinyl is a partner gallery with whom Artemis Art has collaborated in the past on a couple of occasions, and Dystopians opens a new chapter in our collaboration.

The exhibition expands on and introduces us to one key element of Ajim Juxta’s Arcology universe. Dystopians focuses on the humanoids that inhabit this projected future world, based on what the artist observes in our present day society. They have featured in his previous exhibitions and works Artemis Art has exhibited, but this time the Dytopians (or Penghuni Distopia in Bahasa Malaysia) take center stage.

Dystopians is scheduled to run for approximately a month, and concludes in early July 2019. Much thanks to the good folks at Vinyl on Vinyl for this spectacular opportunity to formally introduce Ajim Juxta and his art to the Manila art scene!

The location map on the right provides an easy reference to find the gallery.

Visit Vinyl On Vinyl’s website for more information about the gallery.

Ajim Juxta introduces us to the Dystopians. Companions to whom he shares raw thoughts and emotions, yet simultaneous protagonists to whom he continuously questions.

Ajim’s Dystopians are his observations of us in present generalized societies. Attempting to exist with each other in commonness, yet struggling individually, attempting to develop the ‘self’ throughout the life we have. We start off in varied circumstances, choosing our own experiences, at different paces. Perhaps adopting principles, aiming to seek resolutions; most often on a journey in which we get tired, lazy, marking the start of accumulated excuses. The Dystopians eventually surrender to society, choosing the easier of distraction from self versus the accountability to us.

For the exhibition, Ajim extrapolates from his daily notebooks of being in the present. Getting to know more about the characters he has observed by life-sizing them onto canvas, imparting them knowledge, giving them stories, and allowing them relationships. Together, attempting to answer the niggling question of ‘Where are we going?’

Dystopians is Ajim Juxta’s first solo exhibition outside Malaysia, his home country. Trained as an architect, the multi-awarded emerging artist shows his impressions of Metro Manila which he first visited in 2018, as well as characters that populate an assumed setting that thrives on poverty, despotism, and trepidation. With his renderings of horror vacui and a slew of inherently damaged subjects with frantic scumbles of paint and lines of varying weights and directions, he expresses his observations with unique painting tools and multi-layering techniques, resulting in rawness, candor and frantic energy translated on canvas.

Juxta’s pieces explode with relentless dynamism, his figures seemingly writhing in cadences only they know, with strokes of paint overlapping each other like twisted and never ending queues that, having their own, unfathomable purpose, warp and entangle onto each other. With flesh eaten away, seething masses of bodies are boiled down into bare bones that push and shove towards their place in the sun, or at least the artist’s painting, in visual depictions of degradation and struggle.

Several works are on paper, ink and coffee illustrating strange humanoid forms and hybrids in Up / Down and Family: Mega and Minors. However, it is in Juxta’s acrylic on canvas works that the artist savagely unleashes his subjects on his viewers. Dystopians: Himpit, which in the Malaysian language directly translates into cram or to crowd, is a direct reference to the side of Manila that the artist experienced; with limited living spaces congested by people, it is hard to decipher individual existence and purpose. Counter to this is Dystopians: Dosa or sin, where a single figure, seemingly in repose, is all limbs and motion.

The artist seems fascinated by children as well as he portrays them in different ways. Penghuni Distopia: Anak (Dystopia Dweller: Child) scales down and skins the Indian warrior goddess Durga into a smaller skeletal figure, only instead of a variety of weapons brandished by many arms, Juxta’s subject seems to grasp at thin air, perhaps at play or simply as a way to catch attention. He also offers a series of children in Anak #1, #2 and #3 in blue, red and yellow, as different incarnations of the gadget-obsessed children of today.

Dystopian: Nakhoda (Captain) struts around proudly as an authority figure, while Saksi, Hukum, Daulat (Witness, Law, Sovereignty) seems to hang down its head in shame as horrors unravel before its very eyes. To round off his works, the artist draws on his fascination with structures in Tugu: Kota Kota (Monument: Fort Word), a jagged monstrosity of a framework built out of configured lines that jut out of corners and float on air. Perhaps it is a visual depiction of the power of words to both fortify and destroy, and our penchant for tributes, memorials and remembrances for the truths we desire, and what we want to believe.

In viewing Dystopians by Ajim Juxta, some questions beg to be asked: Are these pieces set in the here and now? Does dystopia exist where we are, and are we the selfsame monsters that the artist paints? If so, how do we escape our worlds, or ourselves?

Following his residency at Acme Studios, London as part of residency program in 2017, Ajim Juxta returned to Malaysia with an intention to process and internalize the experience through his artworks, as well as to share the creative journey with others.

2018 was a busy year for Ajim where he embarked on several organized exhibitions in Malaysia including Ragamasa (Being time) at Titikmerah Collective pop-up space, Arkologi Gelap (Dark Arcologies) at Artemis Art, culminating to a collaborative exhibition titled Tugu|Ugut (Monuments | Threats) which spanned 7 floors of the Malaysian Institute of Architects (PAM) Center in Kuala Lumpur.

‘Having gained from the opportunity of a residency, I did not think a solo showcase would not have justified the experience. The arts are most often not only about you,’ explains Ajim as his motivation for working across various spaces, and with different people.

‘I work with curators, writers, designers, galleries and venues, to ideally present an exhibition that spurs from my thoughts into a combined voice. By seeking artistic collaborations, we will continuously introduce different conversations of and around the bodies of work,’ he further elaborates.

The Dystopians exhibition at Vinyl on Vinyl will see Ajim expanding on his narration of our dystopian futures. ‘My previous exhibitions in 2018 focused more on what us humans are chasing and building in today’s hyper-capitalist state; an accumulation of both tangible and intangible monuments. I then asked, if we continue to live accordingly, how would we evolve?’. He further explains, ‘Perhaps as Dystopians we will not have a need for facial expressions as digital consumption continues to become easy, instantaneous. We might develop multiple upper body limbs from elbow to arms, with no need for hands, a cause and effect of multiplying wants without sight of why we are grabbing.’

Dystopians by Ajim Juxta opens at Vinyl on Vinyl Gallery in Makati, Metro Manila, Philippines, on Tuesday, June 11 2019, with an opening scheduled for 6pm on that day. The exhibition is a partnership between Vinyl on Vinyl and Artemis Art, Kuala Lumpur, as part of their ongoing collaborative efforts to cross-promote artists from Malaysia and the Philippines. 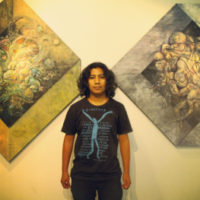 
Although Artemis Art only started working closely with Ajim Juxta since 2016, we’ve been following his progress since he featured as one of the finalists in the 2013 cycle of the Malaysian Emerging Artists Award. In 2016, we selected him as our nominee for Young Art Taipei’s 2016 Young Art Award, in which he emerged as one of the three winners that year, earning him a three month-long residency in Taiwan.

Since then Ajim’s career has steadily progressed, receiving further recognition for his art when he was selected as one of the recipients of the 2016 Young Guns Award, and a year later awarded a three month residency at Acme Studios, London, as part of the Khazanah Nasional Associate Artist Residency program in 2017. Ajim is currently doing his year-long residency at Rimbun Dahan, located just outside Kuala Lumpur, recognized as being one of Malaysia’s most important residency programs.

Ajim has regularly featured in our art fair participations, the most recent being the AArt Citizen Art Shanghai 2019 in May this year. As part of his post-Acme Studios residency series of exhibitions, Artemis Art hosted arkologi: gelap, one of the three solo and collaborative exhibitions the artist did throughout 2018.

Earlier this year, Ajim exhibited in Art Fair Philippines 2019, as part of our partner gallery Vinyl on Vinyl’s backroom collection. Artemis Art continues our collaboration with Vinyl on Vinyl with Dystopians, Ajim’s first solo exhibition outside of Malaysia, another important milestone in the young artist’s career, and Ajim’s formal introduction to the Manila art scene.

This section presents a preview of the artworks selected for Dystopians, scheduled to open on June 11 in Manila. The complete collection, plus the exhibition publication, will be released on this website post-opening.

We congratulate Ajim on this important exhibition, and look forward to greater heights we know he will achieve in time to come. 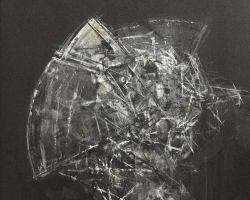 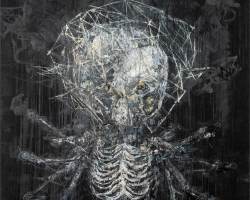 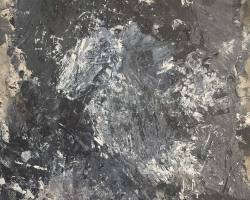 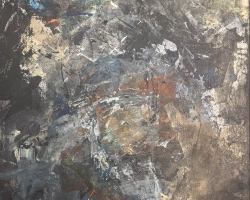 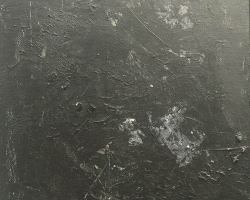 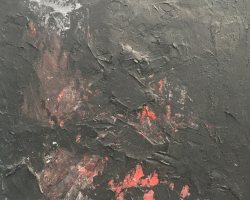 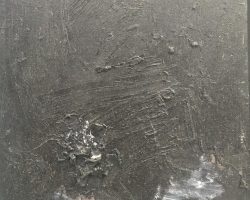 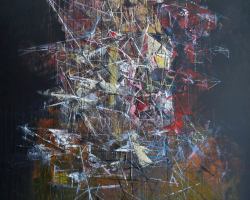 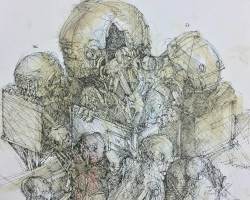 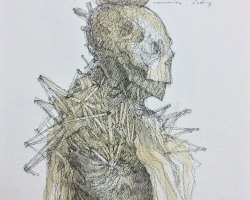 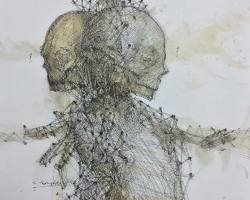 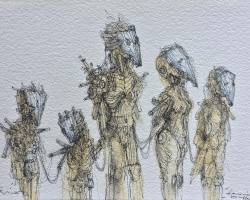 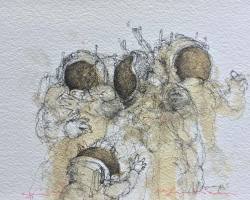 The online (PDF) version of the publication for Dystopians has been included here, and can either be read online below, or downloaded. The original print version is an A5 size booklet, and a limited number of copies are available at the exhibition in Vinyl On Vinyl.

A selection of images from the opening of Dystopians on June 11 2019 has been included in this section. The complete album may be viewed via our Facebook page.